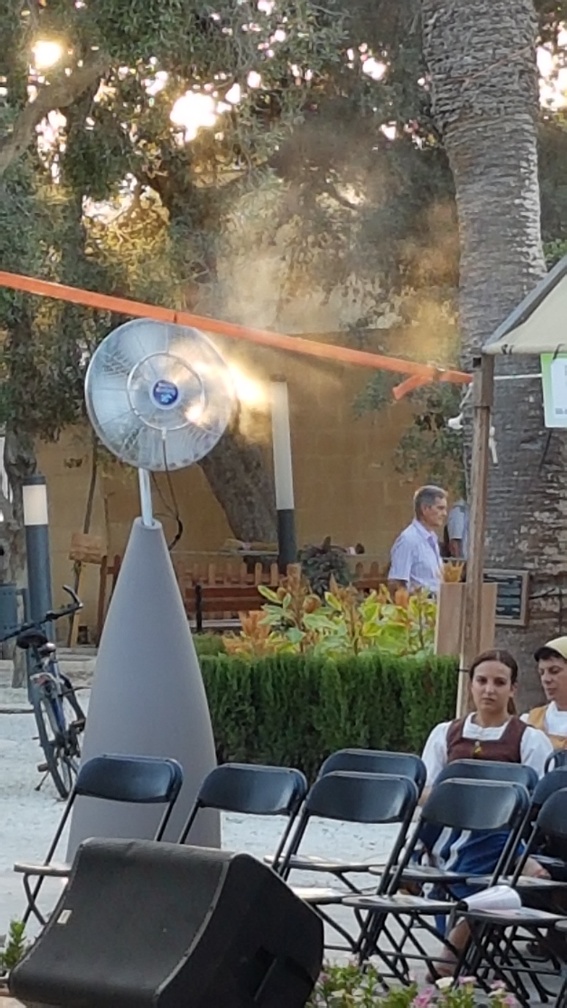 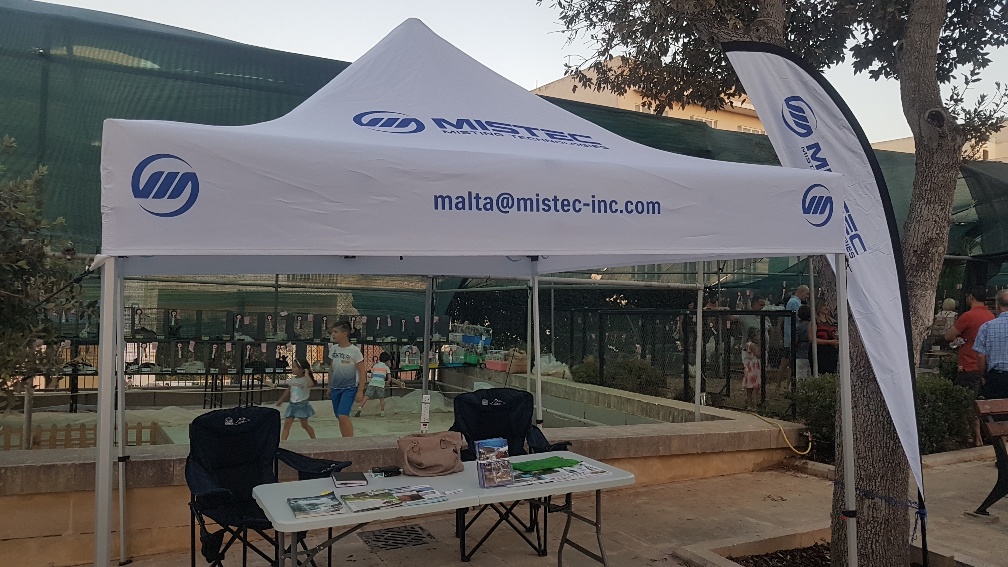 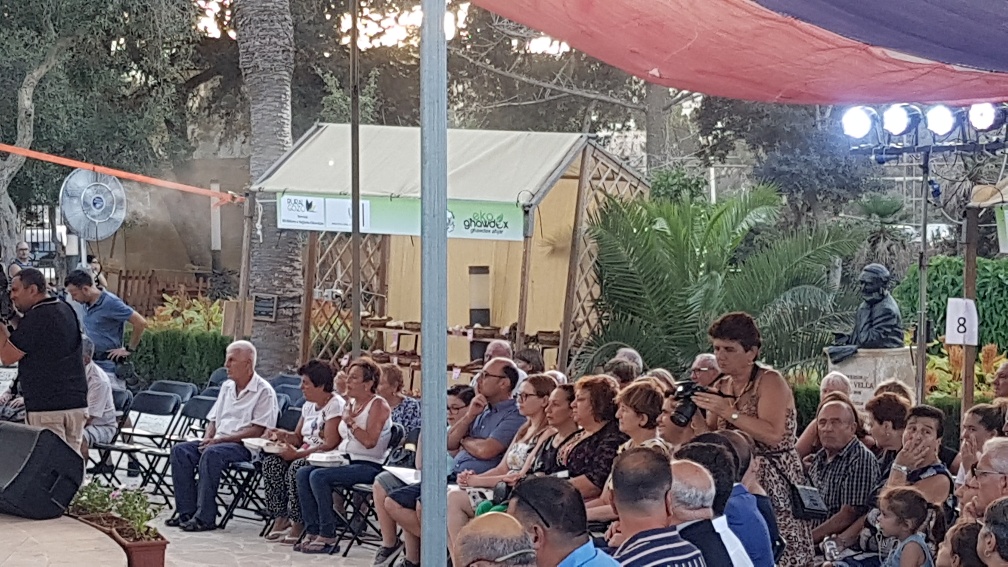 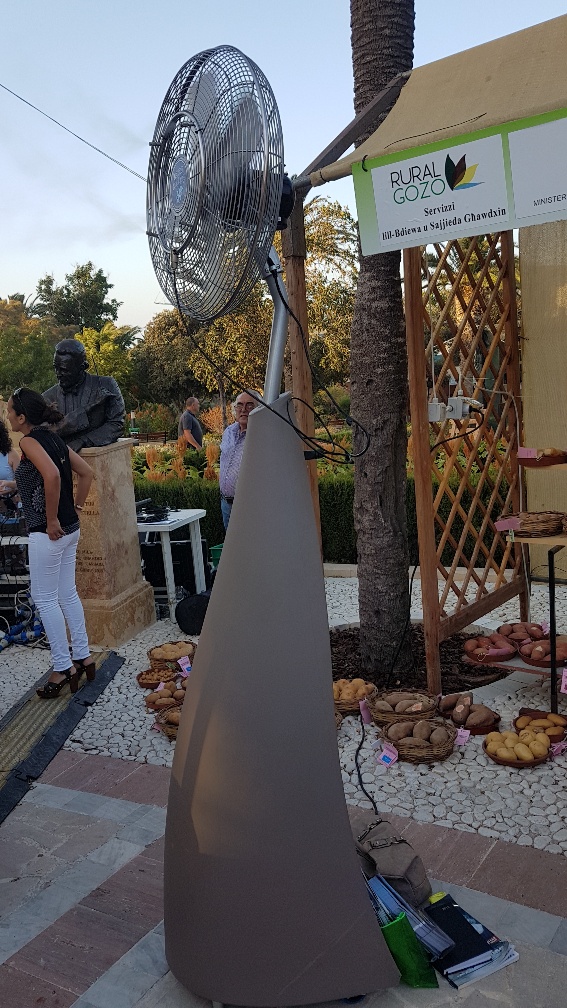 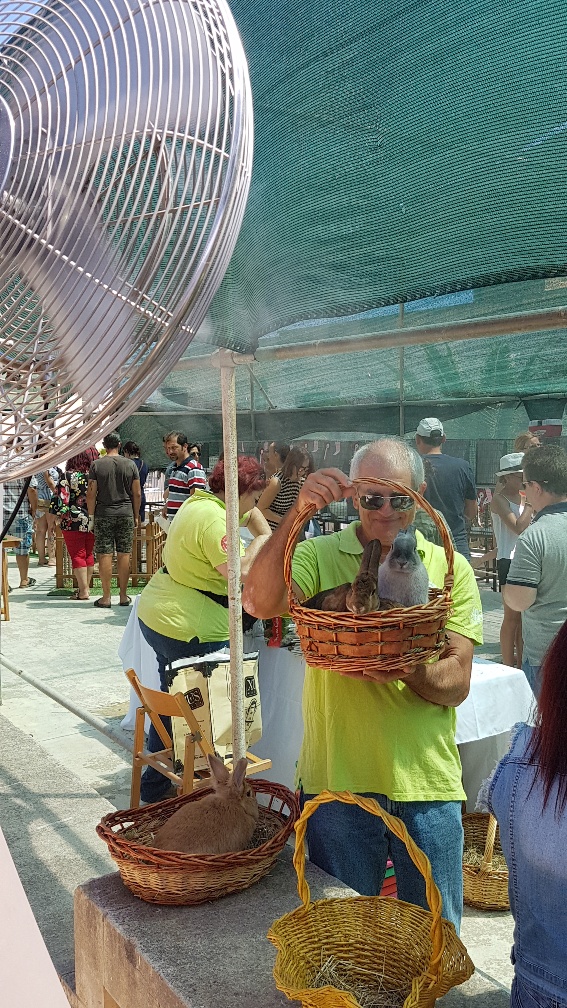 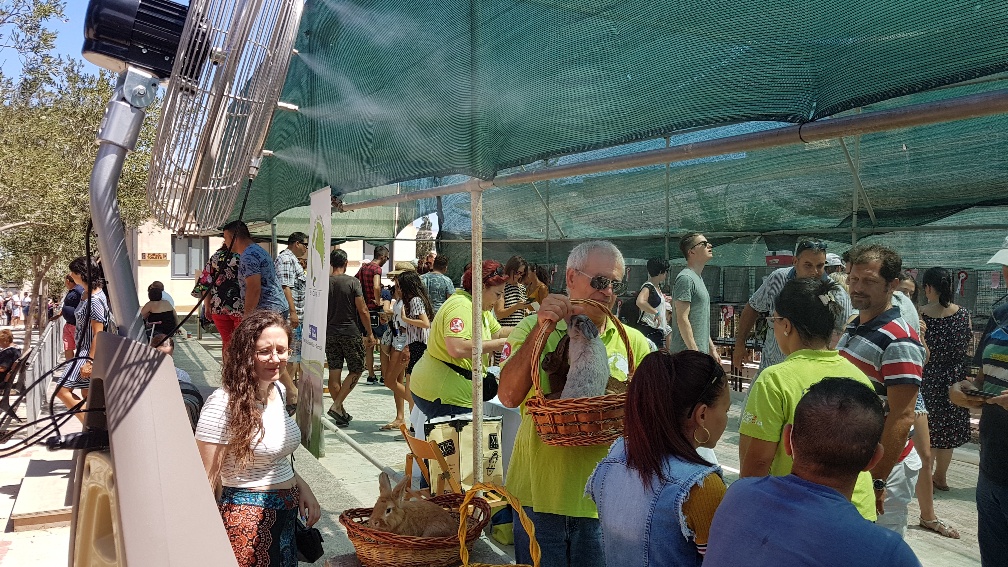 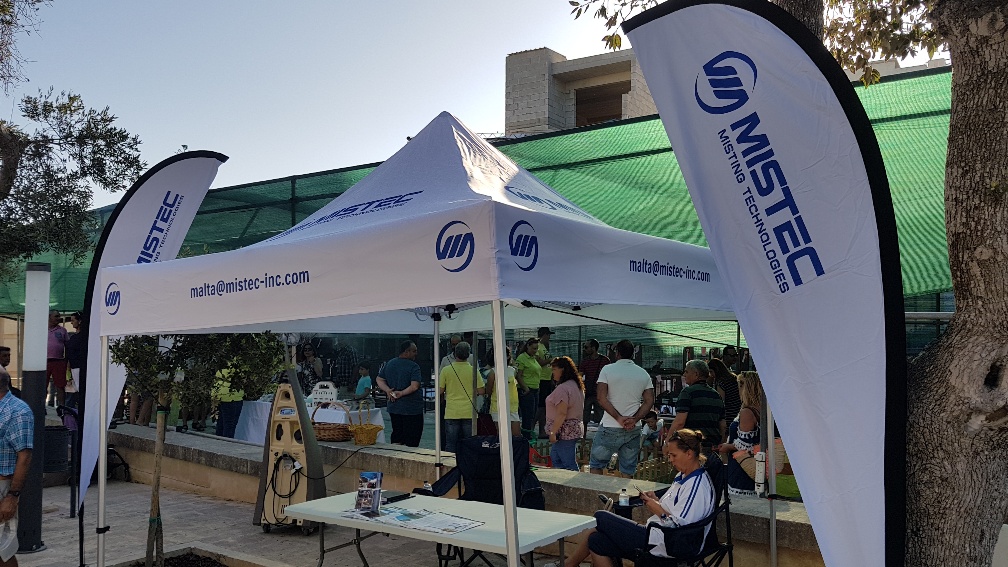 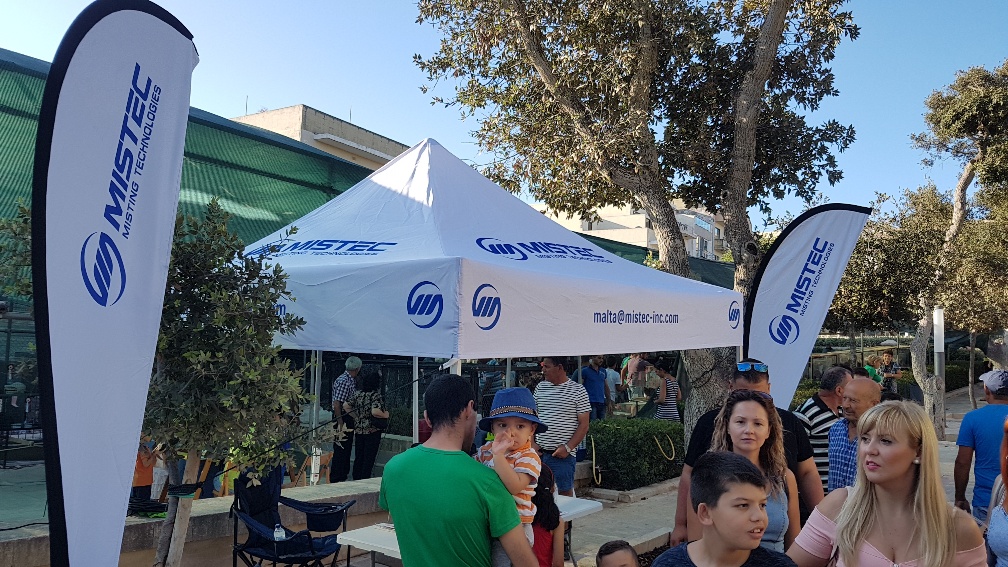 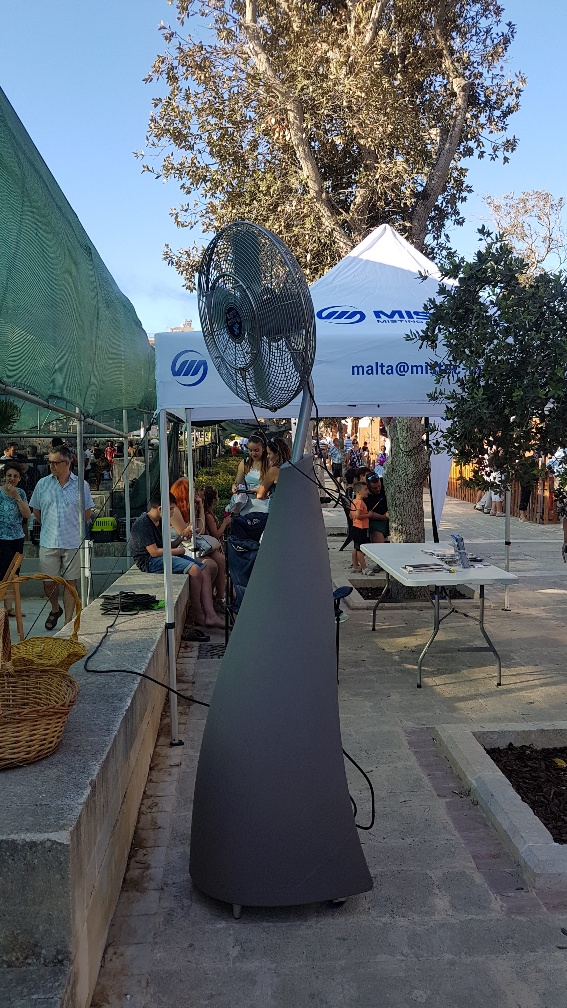 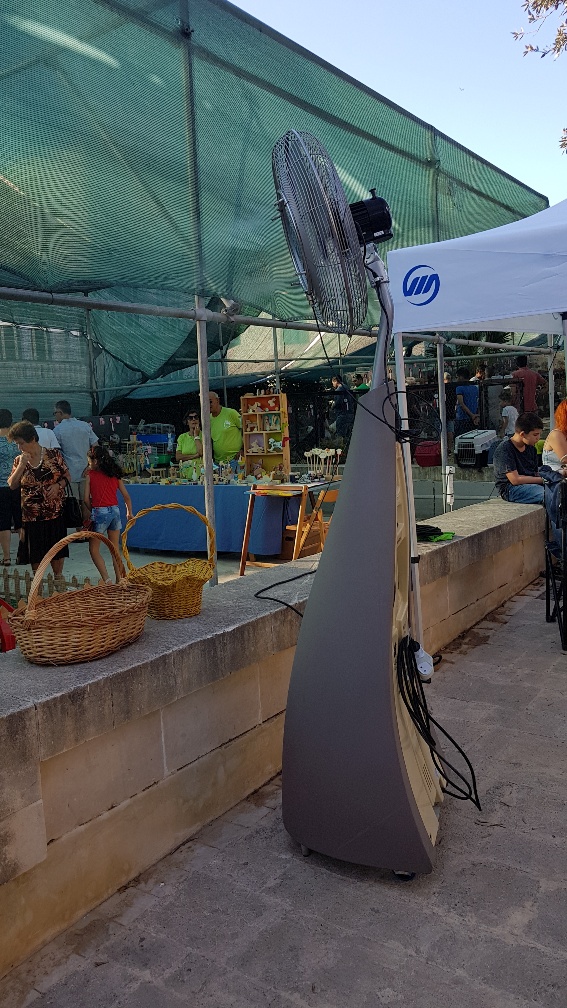 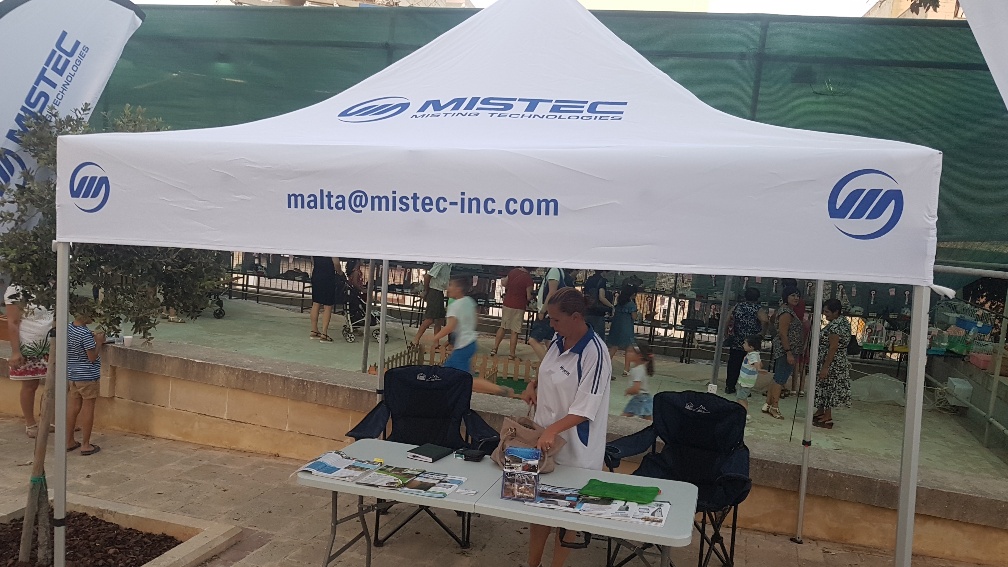 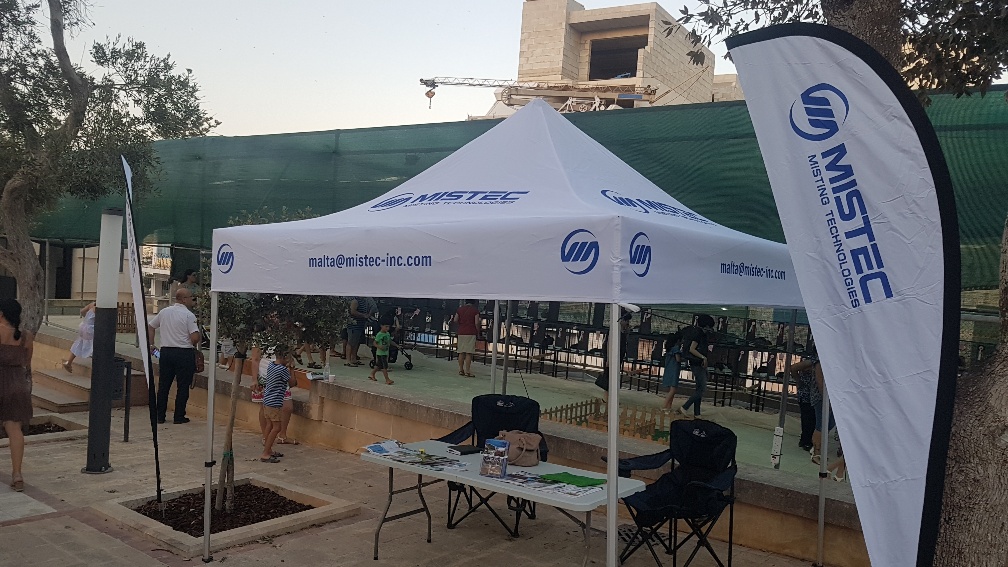 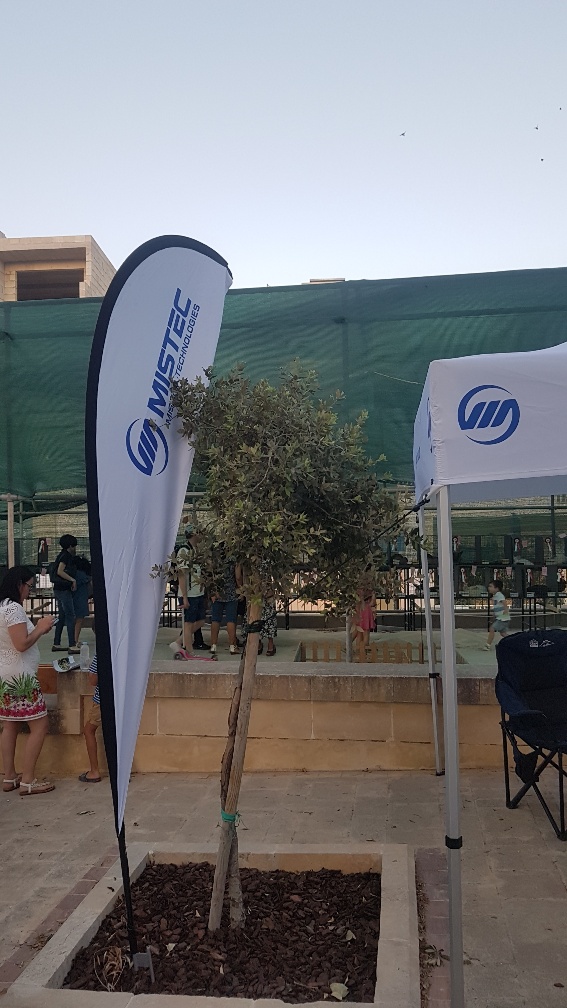 MISTEC Malta recently exhibited at the Gozo Agricultural Show, one of the islands in the Maltese Archipelago.

Primarily focused on agriculture, farmers and animal breeders it was an ideal opportunity to showcase the MISTEC portable misting fan I-Coolers.  These were positioned to help cool animal exhibits as well as the general public and wow, what a huge success the fans turned out to be.

It has always been well known and documented that the general public together with the farmers on the islands do suffer from the extreme heat in the Summer months and there is very much a need for a ‘green’ cooling system which would help reduce soaring temperatures, be environmentally friendly as well as and most importantly be cost effective !  The fact that the systems deter flies, mosquitoes, rats (rodents) and birds is a definite added bonus !  Interestingly and without a doubt this ‘new misting technology’ being introduced onto the islands by MISTEC Malta was given a BIG thumbs up and numerous leads from potential customers was generated over the 2 day exhibition.

The fact that the fans are cheap to run, both on power and water consumption, was a selling point on top of the fact that the surrounding temperatures were realistically dropped by 10°C and was duly witnessed by all who attended the show, including HE The President of Malta Dr George Vella and the Honourable Minister for Gozo, Dr Justyne Caruana.  HE The President even mentioned to the Exhibition Organiser, Mr Neville Mercieca, “These fans are very good” !  Wow what a great referral……..!

All in all a very good exhibition and one which we will have already reserved our space for next year !

Cloud Forest at “Gardens by the Bay” in Singapore

Who would have thought in a massive heaving city one would find a real life flower dome, a cloud forest,... read more

HOR006.20 Horeca Magazine issue 03 - MISTEC Evaporative cooling is the ‘cooling’ effect or the ‘chill’ you feel when a breeze... read more

We use cookies on our website to give you the most relevant experience by remembering your preferences and repeat visits. By clicking “Accept All”, you consent to the use of ALL the cookies. However, you may visit "Cookie Settings" to provide a controlled consent.
Cookie SettingsAccept All
Manage consent

This website uses cookies to improve your experience while you navigate through the website. Out of these, the cookies that are categorized as necessary are stored on your browser as they are essential for the working of basic functionalities of the website. We also use third-party cookies that help us analyze and understand how you use this website. These cookies will be stored in your browser only with your consent. You also have the option to opt-out of these cookies. But opting out of some of these cookies may affect your browsing experience.
Necessary Always Enabled
Necessary cookies are absolutely essential for the website to function properly. These cookies ensure basic functionalities and security features of the website, anonymously.
Functional
Functional cookies help to perform certain functionalities like sharing the content of the website on social media platforms, collect feedbacks, and other third-party features.
Performance
Performance cookies are used to understand and analyze the key performance indexes of the website which helps in delivering a better user experience for the visitors.
Analytics
Analytical cookies are used to understand how visitors interact with the website. These cookies help provide information on metrics the number of visitors, bounce rate, traffic source, etc.
Advertisement
Advertisement cookies are used to provide visitors with relevant ads and marketing campaigns. These cookies track visitors across websites and collect information to provide customized ads.
Others
Other uncategorized cookies are those that are being analyzed and have not been classified into a category as yet.
Nécessaire
Les cookies nécessaires sont absolument essentiels au bon fonctionnement du site Web. Ces cookies assurent les fonctionnalités de base et les fonctions de sécurité du site Web, de manière anonyme.
Necessario
I cookie necessari sono assolutamente essenziali per il corretto funzionamento del sito web. Questi cookie garantiscono le funzionalità di base e le caratteristiche di sicurezza del sito web, in modo anonimo.
Necesario
Las cookies necesarias son absolutamente esenciales para que el sitio web funcione correctamente. Estas cookies garantizan funcionalidades básicas y características de seguridad del sitio web, de forma anónima.
SAVE & ACCEPT